Want To Be A Narrator?

“So, I want to be an audiobook narrator! That looks like some fun, easy money! How do I get started”

My immediate answer is ALWAYS: “You will not make quick easy money. It’s the hardest thing I’ve ever done. You will lose money the first few years. But I LOVE IT.”

Narrator R.C. Bray had this to say:

“What advice would you give someone interested in becoming an audiobook narrator?”

Being a narrator is extremely rewarding and, in some cases, money can even be made! The good news is as long as you’re under no illusions – it looks fun, setting up your own hours and/or working from home sounds perfect, it’s something you “always wanted to do”, someone told you you have a nice voice – that it’s by any means easy, then you’ll do just fine.

As a narrator I hear a combination of all of the above in addition to “I really like to read!” and “is there good money in it?” all the time. And to be blunt those kinds of comments are a little insulting. It’s akin to saying what narrators do for a living is so simple anyone can do it. Not the case I assure you.

Here’s an example of what I mean.

I was approached by a gentleman asking for advice on becoming a narrator. He told me he worked in Aerospace for 30+ years but had always wanted to “give narration a shot.” He loves reading and after being told several times that he has a pleasant voice, he decided to look into it.

Here’s my response: “Imagine me (the once upon a time paper boy, video store clerk, deli manager, and now 44-year old audiobook narrator who was never good at math) telling you (the 30+ year Aerospace scientist – that I am the OG narrator of The Martian and therefor could probably survive alone on Mars for a good deal of time. If you just could put me in contact with the dean of administrations at Space Camp…”

In short, just because I can carve a turkey doesn’t mean I should be a surgeon.

We had a great laugh about this and I’m glad he took it as it was intended: a lighthearted way to say yes, being an audiobook narrator is pretty cool, but no, it’s not just something “cool” anyone can do. Writers, artists, and actors likewise have folks looking to them for help getting into the industry. And why not? Everyone has a creative side they want to engage and I applaud anyone looking to do so. But you have to be real about it. Maybe it looks so simple to do because we make it look simple. It’s work. Lots of it.

As promised, my two cents:

– Having a “great voice” makes little difference; it’s a bonus

– Training outshines a good voice any day, and training can take years

– You can’t just read the page/lines, you have to interpret it. Internalize it. Make it as only YOU can. Doing an impression or in the style of Morgan Freeman, Liev Schreiber, or Simon Vance doesn’t cut it

– You MUST be confident. Any bit of doubt, don’t do it. Once your performance is done, it’s “out there.” Ain’t nothing you can do about it.

– If you can’t take rejection or even if the idea of rejection bothers you in the least, move on. You’re not made for it.

– Whether narrating an audiobook or selling toilet paper, you need to be a natural storyteller; not a reader.

– In addition to what I said about training, sounding like James Earl Jones and having been trained at Julliard won’t save you if you’re not a natural. It’s there or it’s not. Take an honest inventory of yourself. This is not a power of positive thinking/“one day my dream will come true” Disney outlook arena
– Put yourself in an honest position as an outsider and don’t BS yourself. What would an uncensored Simon Cowell or Gordon Ramsay say?

***And remember… I could be wrong about all of this so feel free to ignore it all and just go for it! 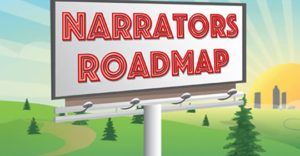 Another AMAZING resource is https://www.narratorsroadmap.com. Please go there, look around and pay for their services if this is something you feel you would like to pursue.

And finally, this test from narrator and coach Sean Pratt is gold: