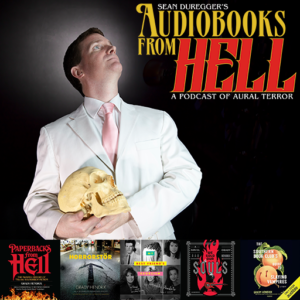 Paperbacks From Hell have taken the world by storm and Grady Hendrix could be the one responsible.

On this episode Grady joins me to discuss his work as an author and a collector of obscure and crazy horror paperback books dubbed “Paperbacks From Hell.” We also discuss his work with Valancourt Books and his latest novel The Southern Book Club’s Guide to Slaying Vampires out next week via Quirk Books.

Award-winning author Grady Hendrix has written about the confederate flag for Playboy magazine, covered machine gun collector conventions, and scripted award shows for Chinese television. His novels include HORRORSTÖR about a haunted IKEA, MY BEST FRIEND’S EXORCISM, which is basically “Beaches” meets “The Exorcist”, and WE SOLD OUR SOULS, a heavy metal horror epic out now from Quirk Books. He’s also the author of PAPERBACKS FROM HELL, a history of the horror paperback boom of the Seventies and Eighties, and the movie MOHAWK, a horror flick about the War of 1812, and the film, SATANIC PANIC. His latest novel The Southern Book Club’s Guide to Slaying Vampires will be out on April 7th, 2020. You can discover more ridiculous facts about him at www.gradyhendrix.com.

Sean Duregger is an audiobook narrator specializing in genre entertainment and a voice over artist. You can hear his narr